Cookie information
This site uses cookies. By continuing to browse the site, you are agreeing to our use of cookies.
Home / AFVs>414 Opel Maultier 15 cm Panzerwerfer 42 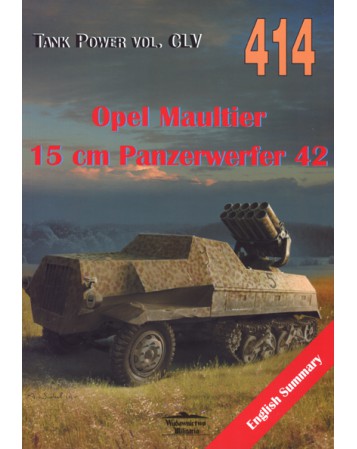 Notify me when available
In 1942, HWA sent an order for the conversion to semi-tracked lorries of the 3t Lkw built by Opel, Ford and K-H-D. The rear axle was replaced by a simple Hortsmann (Carden-Lloyd/Hortsmann) tracked suspension. Opel was ordered to builid an armoured hull to mount 15 cm Ziehnvierling 42 rocket launcher on 15cm Panzerwerfer 42 Sd Kfz 4/1. The armoured vehicle was to give mobility and protection of rocket launcher.
The Waffen-SS designed their own rocket launcher based on famous Soviet BM-8-48 armed with 8 cm Vielfachwerfer rockets. The 15 cm Munitions-kraftwagen Sd Kfz 4 were identical with the combat vehicle, with exception of the launcher.
Two versions of the suspension were builid. 289 15 cm Munitionskraftwagen Sd Kfz 4 and 300 15cm Panzerwerfer 42 Sd Kfz 4/1 were builid in 1943–1944.